Light up your WFH meetings with HomeKit

My desk lamp now turns on whenever I join a meeting for work. Magic! This guide will walk you through setting up something similar for your Mac.

Working at Doximity, a company that has been remote-first since long before the pandemic, necessitates a fair number of video calls as we collaborate and work on challenging problems together. Though meetings constitute only a fraction of my time, I appreciate having some good lighting during those calls. I also appreciate having a little less light at other times to avoid irritating my eyes. I have a simple desk lamp that does the job, but it's slightly tedious to turn it on and off around my meetings. Time for some automation! 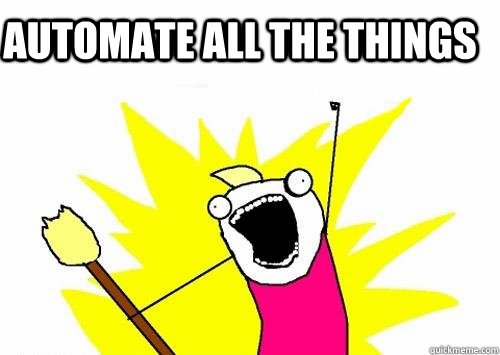 I picked up a pack of Meross Smart Plugs that are HomeKit-compatible, so I could control them with my iPhone or Mac, added one using the Home app on my phone, and plugged in the lamp. After I could toggle the lamp on and off using the Home app, I set out to build some automation to turn on and off the lamp whenever my Macbook camera turns on or off.

This guide walks through the process of setting up HomeKit automation on MacOS whenever any of your Mac's cameras turn on or off.

Unfortunately, HomeKit doesn't provide a built-in way to trigger on camera state. That need not stop you though, if you're willing to open the terminal and maybe tweak a simple regular expression.

Identify camera events for your triggers

The log stream command provides a stream of logged system events, which we can filter and monitor for camera on/off events.

In Terminal, run this to filter the logs to the expected messages on MacOS Monterey 12.1:

While that's running, open the Photo Booth app or any video conferencing software. You'll hopefully see lines like these output from the filtered log stream when the camera starts and stops (which you can trigger by quitting and restarting Photo Booth or toggling the camera).

If you get output, you're done with this step and can use the regular expression matchers I provide in the next steps.

If you get no output, you'll need to broaden the filter to search for event logs that appear when the camera starts and stops. This might be a good starting filter for your search:

Ensure the events you choose are emitted for any camera usage (e.g. in Zoom and Meet) and not just Photo Booth.

You'll need to come up with a regular expression for grep that matches only when your camera is toggled on or off. Modify your grep regular expression until you get (ideally) a single line of output when the camera turns on or off. Beware of anything too generic, like stream, which may trigger your automation when other stream events happen like activating a Bluetooth microphone stream when the microphone turns on.

If you have multiple cameras, you may also want to test switching between cameras.

First, confirm that you're able to use the Home app on your Mac to trigger changes to whatever accessories or scenes you're interested in.

In the Shortcuts app, create a new shortcut (+ button). For toggling a light, you'll need a separate shortcut for each state (e.g. on/off). Give the shortcut a name such as Turn on lamp.

For each shortcut, select the Home app and add its Control action to your shortcut (drag or double-click). Select the specific scene or accessory you want to control, and select a state for you to set it to when the shortcut runs.

Last, confirm that you can trigger these successfully on the command line via Terminal:

Create a script file (e.g. camera-lamp.sh) that, while running, will toggle your light based on whether the camera is running. A starter example:

Replace my shortcut names Turn on lamp and Turn off lamp with your own, if different. Feel free to alter messages like "Lamp on" to fit your scenario.

If you needed to choose a different filter in step 1:

This will trigger when any connected camera changes its state, but you can make
the grep filter more specific to limit it to a specific camera.

Run the script, and test it out. If you named it camera-lamp.sh, run

While the script is running, your HomeKit shortcuts should trigger whenever your camera turns on or off.

With that running… Magic! My desk lamp automatically turns on whenever I join a meeting or a Roundsy social mixer (a free app Doximity built for any kind of virtual event attendees to chat with other random attendees in small groups).

This is a great automation for meetings, but you might want to turn the light on at other times too! 9to5Mac published a great video describing how to create a menu bar button to toggle your Homekit Shortcuts. Adding a button to the Touch Bar Quick Actions is also an option, using the same basic approach.

Next up: Light up a sign outside my office to signal my kids not to walk into my meetings! 😃

Interested in considering working from home for Doximity? I love it here and would be happy to share my experience. Feel free to reach out to me on Twitter (@nilbus) and check out our open positions.